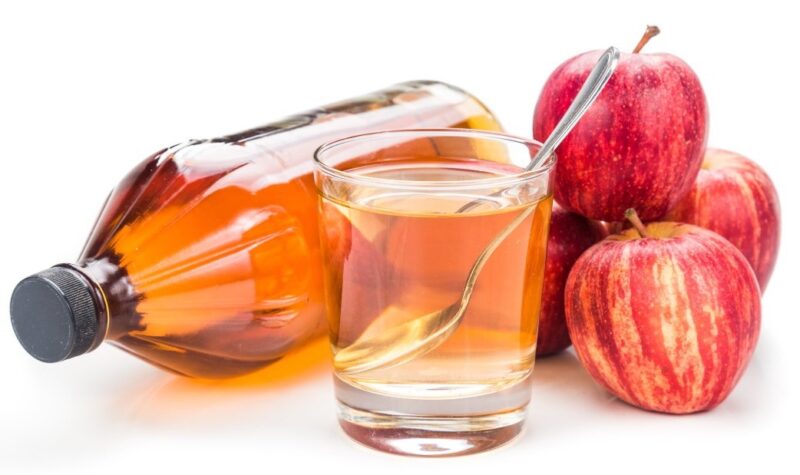 That’s not to say that apple cider vinegar is useless. Science says it *does* work some pretty spectacular miracles, according to Carol Johnston, PhD, a registered dietitian and professor at the School of Nutrition and Health Promotion at Arizona State University in Phoenix, who’s been studying the actual effects of vinegar for years. (Her motto: “Anecdotal remedies might have some merit, but you don’t know until you do the science.”)

First things first: All vinegars contain an active ingredient known as acetic acid, which means all varieties (including pasteurized, unpasteurized, organic, and different flavors) are pretty much the same, according to Johnston, who personally prefers red wine vinegar over apple cider vinegar because it has a smoother taste. The only difference is that darker-colored vinegars may contain trace amounts of antioxidants found in dark colored fruits (like red grapes, pomegranate, etc.), she says.

If you want to experiment with drinking vinegar to soak up any of the benefits listed below, the safest and most effective way is to add 1 to 2 tablespoons of vinegar to one glass of water and drink it on an empty stomach immediately before eating. (Researchers don’t know which foods could cancel out acetic acid’s effects, so you want to make sure it beats any food into your stomach and avoid combining it with other compounds such as salt.)

Don’t even think about shooting it straight up (or applying it topically) without first diluting it in at least 1 cup of water per tablespoon. Your esophagus isn’t designed to withstand all that acid, so it’s all too easy to inadvertently inhale trace amounts of it while trying to swallow. This could send acid into your lungs, where it can cause pain that Johnston likens to sunburn in your lungs.

And don’t overdo it. In large amounts, “acetic acid is a poison and can have toxic effects,” Johnston says. “You’ll see some benefits with one tablespoon, and significant effects with two, but there’s never a time when more than that is better.”

1. It reduces bloating. Vinegar increases the acidity in the stomach, which allows it to digest the food you’ve eaten and helps propel it into the small intestine, according to Raphael Kellman, MD, founder of the Kellman Center for Integrative and Functional Medicine in New York City. Because slow digestion can cause acid reflux, a burning sensation that occurs when food in your stomach backs up all the way into your esophagus and triggers feelings of fullness, consuming vinegar to move things along can stop you from feeling like the Pillsbury Dough Boy.

2. It increases the benefits of the vitamins and minerals in your food. “When your stomach isn’t producing enough acid, this impairs the absorption of nutrients as well as B6, folate, calcium, and iron,” Dr. Kellman explains. Help your body by ingesting a bit more acid in the form of vinegar, and you’ll actually be able to use all the good stuff you consumed by ordering the side salad instead of fries.

3. It cancels out some of the carbs you eat. The acetic acid found in vinegar interferes with the enzymes in your stomach responsible for digesting starch so you can’t absorb the calories from carbs you’ve eaten.

In theory, this means that vinegar should help with weight loss, and existing research supports the notion. But before you go buying bagels by the dozen and vinegar by the gallon: Johnston warns that vinegar will not necessarily promote weight loss (no matter how much you consume) — particularly if you double down on carbs thinking you’re immune to calories. No one knows exactly how many calories vinegar can block because no research has been done on the topic. Because undigested starch could be fermented in the colon, and your body could end up absorbing the starch calories after all, Johnston doubts vinegar can cause rapid weight loss after all.

4. It softens your energy crash after eating lots of sugar or carbs. Consuming vinegar before a meal can help by slowing the rush of sugar to your blood stream, so your blood sugar spike resembles a hill instead of a mountain and you don’t crash quite as hard.

5. It keeps you full longer. In a small but thorough study, researchers found that people who consumed vinegar before eating a breakfast of white bread felt more satisfied 90 minutes after eating compared to people who only ate the bread. (Worth noting: Two hours after eating, both groups were equally hungry. It just goes to show why white bread doesn’t make a stellar breakfast food — with or without vinegar.)

6. It can help your muscles produce energy more efficiently before a major push. Endurance athletes sometimes drink diluted vinegar before they carb-load the night before competing because acetic acid can helps the muscles turn carbs into energy to fuel intense exercise, according to well-regarded research conducted on animals.

8. It cleans fruits and veggies. The best way to clean produce, according to Johnston, is with diluted vinegar: Research suggests its antibacterial properties can significantly reduce pathogens such as Salmonella. Just fill an empty spray bottle with diluted vinegar and spritz your produce (salad stuff, fruits, etc.) then rinse in regular water before serving.

And don’t rely on a vinegar-based salad dressing to redeem a dirty deli’s salad bar fare: Johnston worries that mixing vinegar with ingredients found in salad dressings (like salt or olive oil) or with actual salad could render acetic acid inactive, and says that more research is needed on the topic.

9. It kills bad breath. You might have heard that the antibacterial properties of vinegar can kill microorganisms responsible for bad breath — and in theory, this is true. However, Johnston warns, “it’s no more effective than any other antibacterial agents, and there are better products designed for this purpose.”

10. It deodorizes smelly feet. Just wipe down your clompers with a paper towel dipped in diluted vinegar. The antibacterial properties of vinegar will kill the smelly stuff.

11. It relieves jellyfish stings. In case you’re ever stung by a jellyfish and just so happen to have diluted vinegar on hand, you’ll be awfully lucky: Vinegar deactivates the jellyfish’s sting better than many other remedies — even though hot water still works best, according to a study that compared both techniques.

12. It balances your body’s pH levels, which could mean better bone health. Although vinegar is obviously acidic, it actually has a neutralizing effect once it’s inside of you. Meaning: It makes your body’s pH more basic (i.e., alkaline).

Because studies show that people who eat more alkaline diets (more veggies and less meat) tend to have greater bone mineral density — something you might not think twice about now, but will definitely appreciate as an Old — vinegar could, in theory, strengthen your bones. (It’s a hypothesis that makes lots of sense of paper, even though no one has proven it yet, says Johnston.)

13. It alleviates heartburn — sometimes, according to Johnston, who just wrapped up a study on using vinegar to treat this condition. Vinegar’s effectiveness depends on the source of your heartburn: If you have erosive heartburn caused by lesions in your esophagus or stomach ulcers, a dose of vinegar will only aggravate the problem. But if your heartburn stems from something you ate, adding acetic acid to your stomach can help neutralize the acid in there and help fix the problem, providing you with at least a little bit of comfort.

It could be why some folklore suggests vinegar can sooth an upset stomach triggered by a bacterial infection — which has never been studied, but may check out, according to Johnston.

“Anecdotal remedies might have some merit — if it’s been around for centuries, it’s probably working,” says Johnston, who’s fact-checked many homeopathic benefits of vinegar by conducting controlled experiments. “But you don’t know until you do the science,” she adds, so don’t fall for these unfounded claims that can do more harm than good:

1. It cures acne. Despite what you might have read about vinegar’s antibacterial benefits and ability to clear up breakouts, the acid in the vinegar can irritate your skin and aggravate skin lesions, according to Johnston. Not good!

2. It suppresses your appetite. A small study found that drinking vinegar could reduce your appetite — but the amount you’d have to drink to reap the greatest effects is so unpalatable and nauseating on an empty stomach that it’s actually intolerable. (It’s why the study authors blatantly recommend against using vinegar as an appetite suppressant.)

3. It cleans wounds. Without a doubt, vinegar will kill bacteria — but because acid will irritate the shit out of skin surrounding an open wound, you definitely don’t want to apply it to broken skin. Antibacterial soap will kill the germs without causing undo pain, according to Johnston.

4. It whitens teeth. “I’ve heard of this, but would be careful before trying it because vinegar is an acid that can erode enamel off your teeth or stain it like red wine,” Johnston says.

6. It soothes sunburn. “Vinegar is an acid, so it will only irritate your skin more,” Johnston says. (Duh.)

7. It detoxifies your system. Some naturopathic sources claim vinegar can improve circulation, clear out your liver, and generally clean you out. But Johnston is pretty skeptical: “It might have merit in a trial, but there’s no scientific evidence,” she says

Be the first to review “Apple Cider Vinegar”