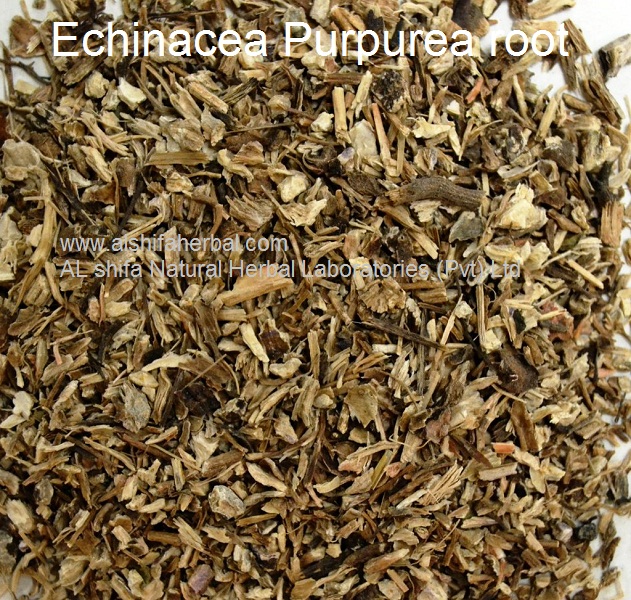 Habitat: Echinecea is native to North America. There are nine types of echinacea in this species of daisy but only a few have a well-documented use in traditional American medicine.

Description: E. angustifolia and E. purpurea are very similar looking plants with the defining difference being the flower colour; purpurea has a purple flower and angustifolia is white.

Echinacea is a spectacular plant with dark green foliage and large daisy like flowers with stems up to 1.5m in height. The flowers have a spiny conical center which gives this herb its name, from the Greek word echino, meaning spiny.

Plant Parts Used: The stabilized juice of E. purpurea tops, which is often sold under the trade name “Echinacin”.

2.Fresh or dried preparations from the roots of E. purpurea, E. angustifolia or E. pallida.

3.Mixtures of any of the above.

Echinacea is probably the most commonly used herb in the Western World. This herb is used to prevent and treat colds, infections and as an herbal remedy for flu.

The three active constituents are alkamides, chicoric acid and polysaccharides; however, the action of these ingredients is still being understood. What useful evidence there is indicates that echinacea mainly stimulates phagocytosis, i.e it acts mainly to stimulate the immune response.

Echinacea has been used to treat prophylaxis, gingivitis, sinusitis.

It has also been utilized as a treatment of infectious illness such as influenza, colds and related symptoms like coughs, high fever and sore throat.

It is also used for bacterial infections, above all those of a chronic or recurrent nature.

The herb is thought to be of help for allergies, septicaemia, pinkeye and skin disorders such as psoriasis.

It has been used as an herbal remedy to strengthen the immune system and to treat conditions of damaged or suppressed immunity such as post-viral syndromes.

Echinacea has been used traditionally for the natural treatment of bronchitis and whooping cough.

As an additional point, a recent study on the value of the plant in the treatment of colds noted that this herb had no value in treating the common cold. Unfortunately, the dosage used in this study was 900mg per day and this is considerably below the therapeutic dose used by herbalists.

Also, it should be noted that the cold virus was introduced artificially to young healthy subjects; in real life situations, echinacea is an immune booster for those with compromised immunity from a range of issues including stress, overwork, exhaustion who are exposed to a wide range of constantly evolving viruses.

Dosages of E. angustifolia root for chronic disorders and infection prophylaxis correspond to 10 to 40 mL per week of a 1:2 fluid extract.

For acute disorders and for serious chronic states of immunodeficiency a daily total of 10 to 30 mL can be given at intervals throughout the day.

Dosages of fresh E. purpurea tincture used in German studies correspond to 20 to 60 mL per week.

Dried herb in tablet form can be taken in doses of 1000mg three times daily.

Potential Side Effects of Echinacea

Taken orally, it is rare for echinacea to cause side effects.

In some people, however, allergic reactions, such as skin irritations, exacerbated asthma, and anaphylaxis has occurred.

People who have allergies to the daisy family, which include plants such as feverfew, chrysanthemums and calendula, may find they are sensitive to echinacea.

It is advisable to discuss any allergies with a professional health practitioner before using the herb as an herbal medication.

In addition, it is worth noting that the quality of echinacea products varies greatly and the herb should only be bought from a reputable company that guarantees the quality of the ingredients.

The herb is also contra-indicated in those using immunosuppressant medications as it may reduce the effectiveness of the medication.

Be the first to review “Echinacea augustifolia”