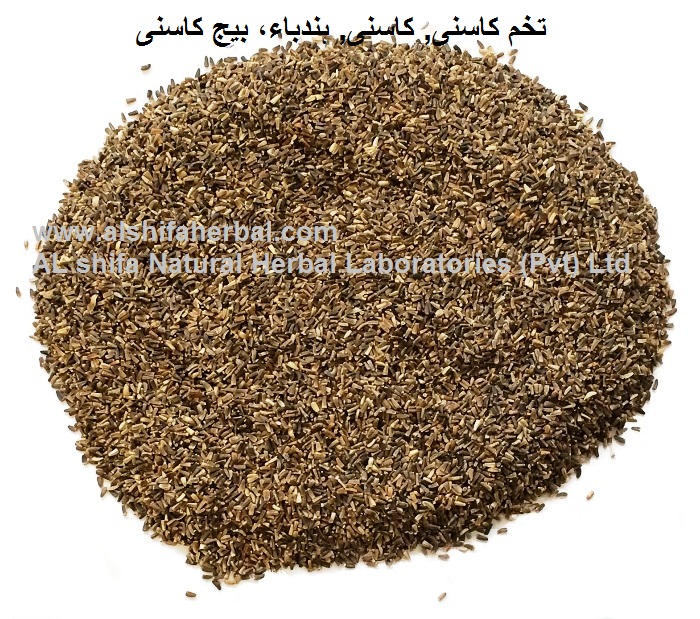 It is a prolific plant that thrives in places where nothing else will grow. Galen, the second-century physician-herbalist, called chicory a “friend of the liver.” The seeds, leaves and root have cardiac, carminative, cordial, depurative, digestive, hypoglycemic, laxative and tonic properties and are useful as a brain tonic and for headache, asthma and bilious vomiting. It is an acclaimed hepatoprotective and, is used in hepatic enlargement, sluggishness, jaundice, fever, vomiting and abdominal pain. Cleanses the urinary tract. It can lower pulse rate and reduce cholesterol levels. It has cholagogue and antiinflammatory properties and is useful in rheumatic condition and gout. Checks bilious enlargements of the spleen with general oedema. It contains 45-60% inulin, a phytochemical that bucks up the immune system and also which can lower levels of blood cholesterol. It increases basal metabolism, which must be the reason why it is a favourite drink amongst students and hard workers. It acts on the central nervous system and heavy doses can generate giddiness and sleep. It is proven to be an instant energiser, which is why it is recommended in the convalescence stage i.e. the period of recovery after the termination of a disease or an operation.
Women who suffer from premenstrual syndrome (PMS) may find that regular use of chicory root as a bitter and a liver tonic may assist in maintaining hormone balance and lessening the symptoms of PMS. Chicory also supports the body’s ability to absorb calcium, a nutrient that helps build and maintain strong teeth and bones. The inulin encourages the growth of bacteria needed for the intestines to work properly. Chicory, therefore, can help to prevent and treat problems such as sluggish digestion, gastric ulcers and flatulence.

The plant is a native of Europe which later spread to other parts of world. In Pakistan and India the plant is found in North West and South East part.

Contraindication
This herb is contraindicated during pregnancy or lactation.

Chichorium intybus is a kind of herbal plant that bears bright blue flowers. Its stature is usually erect and woody. However apart from its beauty which is indeed noteworthy, the plant has much more to its credit.

It is popularly known as chicory and sometimes also referred to as blue sailors or succory. This plant has many varieties that are cultivated throughout the world. Chicory is native to Europe, Australia, New Zealand, northern and southern Africa and America.

The chicory root is significant for its use as a coffee substitute and additive. Furthermore its leaves are used in the preparation of salads and can also be cooked and eaten.

Chichorium Intybus is also regarded as a miracle herb that has been famous ever since for its medicinal uses.

The beauty of the Chicory plant is as mystic as the legends associated with it.

Stem: When the plant starts to bloom, the stems appear sturdy, grooved and more or less hairy. These stems are approximately 30-100 centimeters in height.

Leaf: The plant leaves do not have lobes and are narrow and tapering, somewhat like a pointed apex in appearance. Another noteworthy characteristic about the leaves is that they are stalked.

Flower: The flowers of the chichorium intybus appear bright blue, with a hint of purple color. However in rare scenarios the flowers may also be white or pink. The pretty flower heads are about 2-4 centimeters wide. The two rows of bracts protecting the inflorescence are conspicuously evident with the long and erect inner bracts and comparatively shorter outer bracts. The plant blooms in the time period between July and October. It is interesting to note how these flowers open up and expand in the morning and close up as noon approaches. It is also equally astonishing how each bloom can last only for one single day!

Fruit: The fruits or achenes are distinguished by the toothed scales on the apex. These plant fruits do not have calyx or feathery hairs on the body.

These plants grow in a variety of habitats including open fields, fallow land, ditches and even along roadsides. Chichorium intybus is a very pretty plant.

It has a long tap root resembling the dandelion. Chicory plant is draught resistant owing to its long taproots. Full sun and well drained soil is vital for the growth of the plant.

The chicory plant has been associated with a rich history that dates back to the ancient Egyptian times. Ancient Egyptians held that consuming this herb could lead to purification of the blood and liver. Many also associated chicory with properties that could cure the so called ‘passions of the heart’.

The chicory roots were consumed as a boiled or raw vegetable by ancient Romans to get relief from liver problems.

This legendary herb also finds a place in some of the earliest works of literature. Horace refers to it as a part of his ‘simple’ diet.

Chichorium intybus was significant for its use as a substitute for coffee, right from the Napoleonic Era. Down the years, there are records of Confederate soldiers using chicory for similar purpose during the American Civil War. This was how this popular coffee substitute got introduced in the United States. The era of the Second World War, popularized Camp Coffee, a rich coffee and chicory essence to the United Kingdom.

Furthermore the monks of the Medieval Period cultivated this plant before it got introduced to the European continent.

The discovery of the chicory root as a substitute for the bean drink was a breakthrough in the United States. As such the addition of chicory roots to coffee became a patent American tradition.

Today the Food and Agricultural Organization (FAQ) lists chicory as a plant native to the regions of Europe, western Asia and North Africa.

What secures the plant the age old term of a magic herb, is its association with ancient folklores. This miracle herb stirs ones’ curiosity and interest with folktales that has witches using this flower to transform into rabbits/hares! The romantic concept of the Blue Flower owes its inspiration to the chicory. European folklore has it that this plant had powers to unlock hidden doors.

The medicinal properties of this plant were known to mankind since the ancient times.

Chichorium Intybus How to Grow?

The first step is to prepare the soil. Though this plant is adaptable to any kind of soil, it grows best in the type of soil that is well-drained and rich in nutrients. You can also add manures and organic fertilizers in order to enrich the soil.

The seeds are to b sown maintaining a distance of 1 foot each. The time period from spring to early summer is ideal for sowing the chicory seeds.

Once the crop sprouts you are recommended to thin the seedlings thereby rechecking an maintained distance of 1 foot between each of them. You will notice that the plant germinates within 1-3 weeks.

Lastly you have to take regular care of the sprout by making sure that it is free of weeds. Make sure you water the plant on a regular basis as well. After a period of four months, the plant is ready to be harvested. You can make usage of the plant root after the plant is harvested.

The leaves of the chicory are edible. As a matter of fact despite the bitterness, these leaves are used in many cuisines home to different countries of the world like Italy, Greece, Spain and Turkey. The Lingurian cuisine home to Italy that is prepare using wild chicory leaves goes by the name of preboggion. These leaves are also an important ingredient in Greek cuisine ‘horta’.

Usually the leaves are parboiled in order to reduce the bitterness. Thereafter which you can sauté  the leaves with garlic and other ingredients. You can also try this combination with pasta and other kinds of meat dishes.

The root extracts of the plant accounts for the beverage known as chicory tea. In fact this plant is cultivated in the European continent solely for this popular coffee substitute. Prior to being use as a coffee substitute the roots are baked and ground.

This part of the plant’s usage as a coffee substitute and additive is common to many parts of the world like India, Pakistan, South Africa, southern United States and certain regions of Southeast Asia

This plant forms an excellent low fiber diet for hoofed mammals or livestock. It is also easily digested by these animals. The presence of a good amount of protein and fats in chicory roots makes it a perfect substitute for oats in the diet for horses.

How to Prepare Cichorium Intybus?

You can prepare chicory leaves in any way that suits you best. As such you can slice the leaves or leave them whole. Please note that it is important to get rid of the limp, cracked or discolored leaves. It is also recommended to brush the leaves with lemon juice to prevent discoloration

How to store Cichorium Intybus?

It is recommended to store chichorium intybus leaves preferably in a perforated bag inside are a refrigerator.

This herbal plant is available almost throughout the year. However its peak British season lasts from January to mid march.

There aren’t any serious side effects of this herb as such.

However minor side effects like skin irritation could be encountered if the plant is handled by bare hands. Treat the affected areas that have a tendency to become red with an antiseptic cream. As such you are recommended to use hand gloves in the process of handling the chicory plant.

It has also been reported that consuming an over dose of chicory tea may have the tendency to adversely affect the central nervous system; impairing the reaction ability of individuals.

Be the first to review “Kasni, Cichorium intybus”