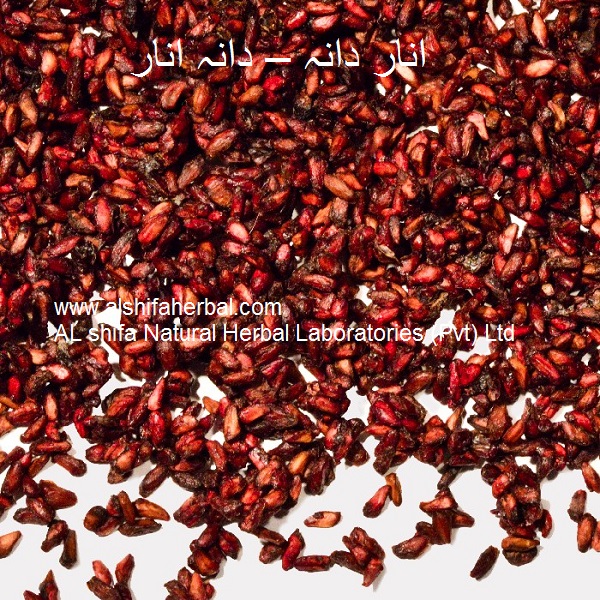 Anardana or Pomegranate is a pretty useful large to medium-sized fruit, having several beneficial properties. The fruit is consumed as food, juices, spices, etc. and is used frequently in the preparation of different recipes. Anardana has rich health benefits and helps in curing several diseases

Anardana is full of nutrients and phytochemicals and the juice or its aril provides a large portion of an adult`s daily vitamin C requirement. The fruit is also a good source of vitamin B5 (pantothenic acid), potassium and antioxidant polyphenols. The richest polyphenols found in Anardana juice are the hydrolysable tannins, also known as punicalagins. The punicalagins have free-radical scavenging properties. They remove free radicals from cells, which helps in maintaining the human cell function intact. The punicalagins are absorbed into the human body and have dietary value as antioxidants. The other important phytochemicals found in Anardana include the beta-carotene. The other nutrients found in Anardana include the polyphenols like catechins, gallocatechins. The anthocyanins like prodelphinidins, delphinidin, cyanidin, and pelargonidin, are also found in Anardana.

The seeds and the pulp of Anardana, named aril is edible and contains the nutrients like energy, carbohydrates, sugars, dietary fibre, fat, protein, thiamine, riboflavin, niacin, pantothenic acid, vitamin, folate, vitamin c, calcium, iron, magnesium, phosphorus, potassium, and zinc. All these nutrients are pretty helpful for human and help in maintaining good health. The pomegranate phenolic extracts are used in many food and dietary supplement products. One of the extracts of Anardana is ellagic acid that may become useable only after the parent molecule, punicalagins are metabolised.

Anardana contains many health benefits, which are useful for treating various diseases. Different parts of Anardana or Pomegranate are used in different treatment methods. Mainly the fruit and seed are used in modern medicinal preparations. The rind and root or bark, are also used in some traditional remedies. Anardana is mainly used for curing the diseases like prostate cancer, prostates hyperplasia, diabetes, lymphoma, rhinovirus infection, common cold, oxidative stress in hemodialysis, atherosclerosis, coronary artery disease, etc. The polyphenols of the Anardana juice aid in repairing wound and in strengthening the immune system. They have an anti-inflammatory effect, as well. Another important benefit of the Anardana juice is that, it can help to slow skin wrinkling. For this property, the fruit has been used as a popular ingredient in anti-aging remedies in both traditional and modern treatment methods. The Anardana juice helps in treating osteoarthritis, by slowing the deterioration of cartilage. It can be effective in increasing blood flow to the heart, and hence, is helpful for patients suffering from ischemic heart disease. It can also reduce arterial plaque.

Another benefit of Anardana juice is that, it can reduce systolic blood pressure by inhibiting serum angiotensin-converting enzyme. The juice can inhibit viral infections and may have antibacterial effects against dental plaque, as well. The polyphenols found in Anardana juice inhibit estrogen synthesis. The pomegranate seed oil can be effective against proliferation of breast cancer cells in vitro. Consuming eight ounces of pomegranate juice daily for three months, can improve the amount of oxygen getting to the heart muscle of patients suffering from coronary heart disease. Long-term consumption of pomegranate juice can help in combating erectile dysfunction, as well. The Anardana juice can be consumed as a liquid and its extracts can be taken as pill, capsule, or powder form.

Anardana has many benefits as a food item. The fruit is fairly difficult and fiddly to peel and eat, and its juicy red `arils` or seed cases need to be separated from the pith by hand. The fruit is usually eaten raw. The entire seed of the plant is consumed raw; however, the fleshy outer portion of the seed is the most desired part. The taste of Anardana juice varies depending on different cultivars of the plant, and also in its ripeness. The taste can be very sweet or sour; however, most types of Anardana are moderate in taste. The wild pomegranate seeds are sometimes used as spice, most commonly in Indian cuisine. The seeds are generally separated from the flesh, dried for 10-15 days and then used as an acidic agent for chutney and curry production. While eating dishes containing them, the Anardana seeds are also crunched to avoid becoming stuck in teeth. The pomegranate
seeds are used in salads and sometimes as garnish for desserts, as well.

The pomegranate tree originated in Persia and the Himalayas was taken to Syria in 1600 BC and was cultivated in the Mediterranean region, the subcontinent, Africa and Europe. It is mentioned in the Eber Papyrus, and was found in the tombs of Egyptian pharaohs, being one of the food items that were needed in the afterlife. In many cultures it is a symbol of immortality and fertility. (In Rome wreaths of the pomegranate tree were worn by brides.) In 700BC it was imported from Carthage to Rome, and it gets its Latin name from these origins; Punicum malum means Carthage, or Punic apple. Its botanical name is as unique as its properties, as so far, it is the only plant known to contain estron.

It was recommended by Dioscorides, in the first century AD, as a treatment for mouth ulcers and those that are found on the genitals and in the anus. As it has astringent properties its juice was used for binding wounds and staunching the flow of blood. Pliny said it was good for women during pregnancy. The leaves and seeds were used in decoctions in the ancient world to get rid of intestinal worms and the tree bark was used to flush tapeworms out of the intestines.

In traditional medicine the rind of the fruit is used in decoctions to stop dysentery and diarrhea, while the pulp and seeds are used as a laxative and to reduce stomach pain.

Modern medical research has shown that it is high in antioxidants, so it can help patients with cardiovascular diseases. However, research is still continuing into the possible uses of the pomegranate.
The pomegranate features prominently in the myths of Persephone and Hades. There are many versions of the abduction of Persephone to the underworld, but to cut a long myth short, Persephone was unable to return to her mother Demeter because she had eaten seeds of the pomegranate while in the underworld. She was allowed to return to the upper world for spring and summer, but had to return to the underworld in autumn and winter.
It has been a potent symbol throughout history, and was popular as a design on cloth in the Italian Renaissance, as Eleonora di Toledo, wife of Cosimo de Medici was depicted in paintings wearing dresses decorated with the pomegranate motif. It is said that as she was the mother of seven sons, the pomegranate symbolized her role as valued mother, or possibly her fecundity.

Henry VIII is reputed to have planted the first pomegranate tree in England, and Shakespeare refers to it in three of his plays, All’s Well that Ends Well, Romeo and Juliet and Henry IV. It was also mentioned by Chaucer in his Canterbury Tales.

If you’ve been to the Alhambra in Grenada you will have seen the pomegranate motif in archways and mosaics, as the Moors used it as their symbol of their Grenada kingdom. It was a royal fruit, perhaps because of the ‘crown’ on top of the fruit, left over from the blossom.

The French called the ‘grenade’ after the seed-splattering properties of the pomegranate. Greeks splatter a pomegranate on the threshold of houses at New Year, to bring luck in the coming year.
You may never have eaten a pomegranate, but if you’ve had a cocktail containing grenadine (Tequila Sunrise for example), then you’ll have an idea of what they taste like; sour-sweet.

We use the seeds in our pakora and chutneys (these are more like thick sauces, than what we call chutney in English-see recipe below) and sometimes cooked in vegetable dishes. Fresh seeds are used to garnish sweet dishes in many cuisines, including Turkish and Greek. The juice is refreshing, and here you can buy cordial of pomegranate to dilute. It’s very refreshing on swelteringly hot days. The seeds are usually dried, but if you soak them in water for 15 mins and then crush them they add a piquant flavour to a dish. Try the recipe below.

Method
Grind the seeds very well, and then grind all the other ingredients with the seeds. Add a little water, mix thoroughly and the chutney is ready to serve with meat of fish.
This has Taste and is a Treat.
Recommended Dosage: Dried Seeds: 5 to 10 g powder; Rind : 3 to 6 g powder; Juice: 15 to 30 ml.

Contraindication: Doses greater than those recommended may cause nausea, dizziness and vomiting.

Be the first to review “Anar dana, Dried pomegranate seeds”