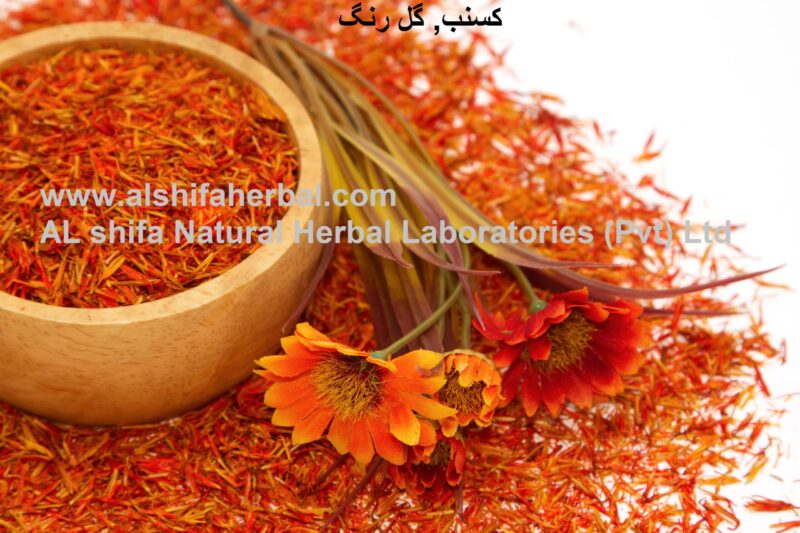 It is known as Fake Saffron because it has been used as a less expensive alternative to Saffron (Crocus sativus), and also because they have similar properties. The seeds are abortifacient, alterative, analgesic, anodyne, antiaging, antibacterial, antihydrotic, antiinflammatory, antioxidant, antitumor, aphrodisiac, bitter, cardiac, carminative, diaphoretic, diuretic, emmenagogue, expectorant, febrifuge, hypocholesterolemic, immunostimulant, purgative, sedative, stimulant, tonic and vermifuge. Charaka, the famous Indian Vaid, gave the seeds for calculus, gravel and dysuria. Useful as an astringent in dysmenorrhoea. Stimulates menstruation and gives relief to abdominal pain. It is also used to firm up the uterus after childbirth. Also useful in sexual and seminal debility, cough, asthma and colic. Tends to lower cholesterol levels, making it useful in preventing heart diseases. The claim has also been made that safflower flowers prevent coronary artery disease because they are a digestive bitter and assist in the digestion of oils. Infusions of safflower flowers are used to lower the accumulation of lactic acid in the muscles during athletic competition. In addition, a compound has been isolated from safflower that stimulates the immune system in mice. Additional studies are ongoing to confirm this effect. Also used in weight loss as a fat burner.
More recently, safflower has been identified as the source of several flavonoids with strong antioxidative activity.

Description: This herbaceous plant is a summer annual (in Illinois) that forms a low rosette during the spring, but by summer it bolts to become 1-4′ tall. A typical plant is unbranched below and branched above with ascending lateral stems. The stems are light green to light yellowish tan, terete, glabrous, and stiff. Alternate leaves occur at intervals along these stems. These leaves are 2-6″ long, ½-2″ across, and stiff; they are lanceolate, lanceolate-oblong, ovate, or ovate-oblong in shape. The leaf bases are sessile or they clasp the stems. Leaf margins are mostly smooth (entire) with scattered yellow spines, although lower leaf margins are sometimes spineless and slightly dentate (although in some uncommon cultivars, all leaves may be spineless). Both the upper and lower surfaces of the leaves are dark green and glabrous; minute pubescence may occur along the lower surfaces of the central leaf veins.

Each upper stem terminates in 1-5 flowerheads. The flowerheads of each branch are usually clustered together on short peduncles. Each flowerhead is ¾-1½” across (excluding the outer phyllaries), consisting of 20-100 disk florets. These florets are ¾-1″ in length, although their bases are hidden from view. The corollas of these florets are yellow to red (rarely white), narrowly cylindrical below, and 5-lobed above; these lobes are linear in shape and spreading. The styles are strongly exerted from the corollas. Around the base of the flowerhead, there are several outer phyllaries (floral bracts) up to 1½” long that are widely spreading and stiff; they are elliptic or lanceolate in shape, while their margins are smooth (entire) with scattered yellow spines. The surfaces of these outer bracts are dark green and glabrous. The inner phyllaries are mostly erect and appressed together; they are light green, ovate or lanceolate in shape, and covered with appressed hairs. The margins of the inner phyllaries are mostly smooth (entire) and ciliate, although their tips are spiny. However, in some uncommon cultivars, both outer and inner phyllaries are spineless. The blooming period occurs from mid-spring into the fall (in Illinois), lasting about 1-3 months. Afterwards, fertile florets are replaced by achenes. The achenes are 6-8 mm. long, white or light brown, oblanceoloid in shape, bluntly 4-angled, and often longitudinally striped. Usually the apices of these achenes lack tufts of hair, although in some uncommon cultivars short stiff bristles are present. The root system consists of a stout taproot up to 3-4′ long and some lateral roots. This plant reproduces by reseeding itself.

Cultivation: Safflower adapts to full sun, mesic to dry conditions, and various kinds of soil, including those that contain loam, sandy loam, or clay-loam. It prefers cool to warm temperatures while in the rosette stage, and warm to hot temperatures after it bolts (a warm-temperate zone with long summer days, a long growing season, and adequate rainfall prior to the blooming period). In areas with high humidity or cool weather during the summer, this plant is vulnerable to a variety of fungal disease organisms. Because of the deep taproot, resistance to heat and drought is excellent.

Range & Habitat: The non-native Safflower uncommonly naturalizes in Illinois, occurring in Champaign County However, the presence of this species within the state is probably under-reported. Because of its preference for areas with relatively low humidity, Safflower is cultivated primarily in the western half of the United States, where it more frequently naturalizes. In the eastern half of the United States (including Illinois), naturalized plants are typically found around bird feeders as Safflower is sometimes used as a source of bird seed. Naturalized plants can occur after birds inadvertently drop the seeds, or spill the seeds from a bird feeder. As a result, typically habitats in Illinois are unmowed areas around bird feeders, including vegetable gardens, flowerbeds, open spaces near shrubbery, and edges of yards. However, these naturalized plants rarely persist from one year to the next. Safflower was introduced into the United States during the early 20th century as an agricultural crop (as a source of vegetable oil and a dye for clothing or food). This plant is probably native to the eastern Mediterranean region and parts of southern and central Asia, where it has been cultivated for thousands of years.

Faunal Associations: Little specific information is available for the floral-faunal relationships of Safflower in North America. The flowers are cross-pollinated by bumblebees, honeybees, other long-tongued bees, and probably other insects with long mouth parts (e.g., butterflies & skippers). However, in the absence of cross-pollination, the flowers are self-fertile. Seed bugs (Lygus), aphids, leafhoppers, thrips, wireworms, and the larvae of some moths are reported to feed destructively on Safflower. Among vertebrate animals, some songbirds (e.g., Cardinals) and probably upland gamebrids feed on the seeds, which are sometimes used as a source of food in bird feeders. Prior to the blooming period, the foliage of Safflower is reportedly edible to sheep and, to a lesser extent, cattle. The suitability of the foliage as a source of forage depends in part on its level of spininess; this varies with different cultivars.

Comments: Safflower is grown primarily as an agricultural crop in the western half of the United States and other parts of the world. The flowerheads are a source of red and yellow dyes for clothing and food (now largely replaced by synthetic dyes), while vegetable oil is derived from its seeds. Safflower oil is high in oleic and linoleic fatty acids, and it is used as a source for cooking oil, salad oil, industrial oil, biodiesel fuel, margarine, soap, cosmetics, oil-based paints, and varnishes. Roasted or fried hulled seeds are edible to humans, while unhulled raw seeds are used as a source of food for birds. Young foliage and meal from processed seeds are edible to livestock (e.g., cattle & sheep). The primary advantage of Safflower over other agricultural crops is its ability to adapt to hot dry climates. Because of the spines on its foliage and floral bracts, Safflower resembles thistles (Cirsium spp., Carduus spp.), but the corollas of its flowerheads are yellow to red, rather than pink or purple. Unlike thistles, the achenes of Safflower lack tufts of hair at their apices, except for some uncommon cultivars that have achenes with short bristles. In addition, the widely spreading and spiny floral bracts of Safflower have a distinctive appearance.

Safflower Oil is flavourless and colourless, and nutritionally similar to sunflower oil. It is used mainly as cooking oil, in salad dressing, and for the production of margarine. It may also be taken as a nutritional supplement. INCI nomenclature is Carthamus tinctorius

Be the first to review “Kusumbh, Safflower”