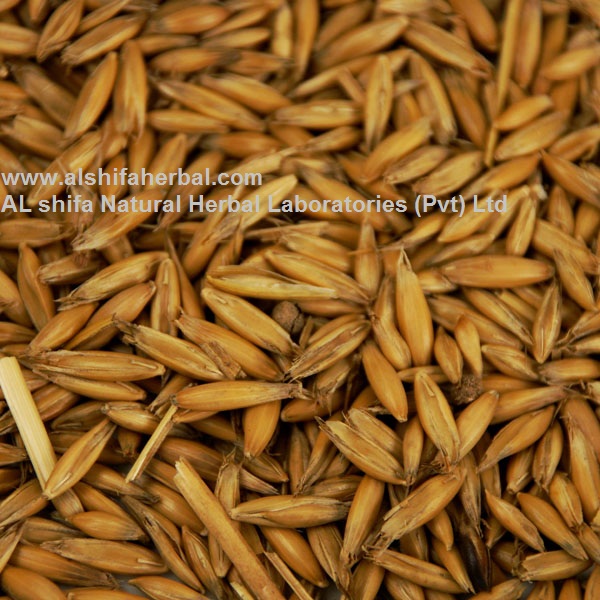 The genus name, Avena, is Latin for “nourishing.” Oat has antidepressant, antispasmodic, demulcent, emollient, hypoglycemic, laxative, nervine, nutritive, prostatelium, soothing, stimulant, tonic, uterine tonic and vulnerary properties. It is a most nutritious cereal containing a fair proportion of all the food elements (protein, calcium, magnesium, silicon, potassium, iron and vitamins), and makes an excellent energy-giving food. The bodybuilding nutrients help make strong bones and teeth, and are vital for a healthy nervous system. Oats are one of the finest restorative naturals for the nervous system and can be helpful when withdrawing from tranquillisers and antidepressant drugs. In cases where the bodily vigour is low and the body is ill-nourished, Oatmeal is very valuable. Oat preparations are used for diseases and complaints of the gastrointestinal tract, gallbladder and kidneys, for cardiovascular disorders, constipation, diabetes, diarrhoea, physical fatigue, rheumatism and gout. Oats are one of the best source of inositol, which is important for maintaining optimum blood cholesterol levels.
In traditional medicine, oat straw (dried stem) is used to treat a number of ailments, including arthritis and rheumatism. Some sources also recommend oat straw for treating shingles, herpes infections, and addictions. In Europe today, herbalists and alternative health practitioners prescribe oat straw extracts as nerve tonics for weakened constitutions. Many regard it as an excellent tonic for the whole body, and valuable for bolstering physical and emotional fatigue, from mild insomnia to anxiety. Oat straw’s soundest reputation by far is as a topical remedy for irritated and inflamed dry skin.
Specifically, oat straw may help to soothe itchy skin. Oat straw has rich emollient qualities due to its high gluten and mucilage content. Promote nail health. As a concentrated source of silica, oat straw supplements and herbal tea (as well as oatmeal) may help to strengthen nails that are cracking or splitting. Silica is a key ingredient in nails. Help smokers quit. Several small studies in the 1970s suggested that oat straw liquid extract might help tobacco users kick the habit by easing withdrawal from nicotine.
Oats have been eaten since prehistoric times. The genus name, Avena, is derived from Latin and means “nourishing”. Sativa means “cultivated”. Highly nutritive and supportive of the nervous system, Oat Straw helps build healthy bones, skin, hair and nails. Oat Straw is not a bona fide aphrodisiac, but it does nourish the nerves, making tactile sensations more pleasurable. Oat Straw is one of the best naturals for “feeding” the central nervous system, especially when under stress. It is considered a specific in cases of nervous debility & exhaustion, especially when associated with depression. Oat Straw may be used with most of the other herbal nervines, both relaxant and stimulatory, to strengthen the nervous system. It is also used in general debility. The high levels of silicic acid in the straw explains its use as a remedy for skin conditions, especially for external applications. Oat Straw is often used as a bath herb to soften skin and help with eczema and neuralgia. The husks have been used historically to stuff pillows and bedding, which is said to have a sedative effect and help for those with rheumatism. Oats has also been used extensively for culinary purposes. The Oat grain from the ripened seed is high in protein and helps to increase stamina. Oat bran (fiber) has been shown to lower cholesterol levels. The primary chemical constituents of Oat Straw includes saponins, flavonoids, starch, alkaloids (trigonelline, avenine), steroids, calcium, iron, B vitamins, lysine, and methionine.
Oat straw contains phytoestrogen which promotes breast tissue growth by mimicking the action of estrogen upon the mammary glands.
Some believe the idiom “sowing your wild oats” is based on the observation that stallions given wild oat experienced greater sex drives. The herb is a strength enhancer for both and women. Clinical studies at the Institute for Advanced Study of Human Sexuality have shown that it helps improve libido dramatically. They have shown that it exerts its action by freeing up testosterone. Free testosterone increases stamina and promotes muscle and penile growth. The study also showed that both males and females have reported positive results including better stamina and an overall feeling of well being. .

Contraindication
Those with gluten allergies should use this herb with caution .

Are you feeling stressed, tired, depressed, fed-up, run down or even lacking your usual sexual desire? If so, have you considered a daily dose of Avena sativa (also known as Oats or Oatstraw

This wonderful herb is thought to be soothing to the brain and nervous system, whilst at the same time increasing sexual desire, and performance, in both men and women!

Avena sativa is quickly becoming a popular natural alternative to pharmaceutical erection enhancers without the dangerous side effects. Also known as Oats Milky Seed or Oatstraw, Avena Sativa is used to stimulate both men and women quickly and effectively. It is often described as the “Natural Viagra”! Its stimulating effects are well known in the animal world, especially with horses where it is widely known that if you feed them oats their behaviour will be wild and energetic! And we’ve all heard the term “sowing your oats”.

In women, the effect seems to be that of increasing sexual desire rather than physical performance. Avena sativa contains compounds which are both sedative and soothing to the brain and nervous system, hence it is said to be a good herb as a nerve restorative. In women the aphrodisiac effect seems to work by relaxing the body which in turn allows a natural increase in desire.

In men it appears to be effective for treating impotence and premature ejaculation, probably by increasing healthy blood flow.

As a food, oats are known to be good for the heart because they keep blood fats under control. They also have other medicinal properties.

Avena sativa seeds are not only a rich source of carbohydrate and soluble fibre, they also have the highest content of Iron, Zinc and Manganese of any grain. It is said to be useful as a nerve restorative.

Avena sativa has no known side effects, unlike the sometimes dangerous sexual prescription drugs. It is used as a nervous system general tonic as well as a general health tonic.

Avena sativa is often the primary ingredient in expensive sexual formulas and in the popular alternatives Herbal V, Cobra and Biogra. There is no need to purchase expensive herbal formulas. The pure herb is more powerful and is not expensive to use.

Avena sativa does not appear to interact with drugs so it is often used as a safe alternative to other herbs that are used for anxiety, such as St John’s wort, which cannot be taken with many prescription medications. Avena sativa may also be of use in helping with drug withdrawal and is often combined with valerian and skullcap.

Oats are sometimes added to the bath as a topical treatment for the skin condition eczema. Generally, there are no side effects or contra-indications from using avena sativa herbal supplements.

Be the first to review “jo, Oats, Oatmeal”