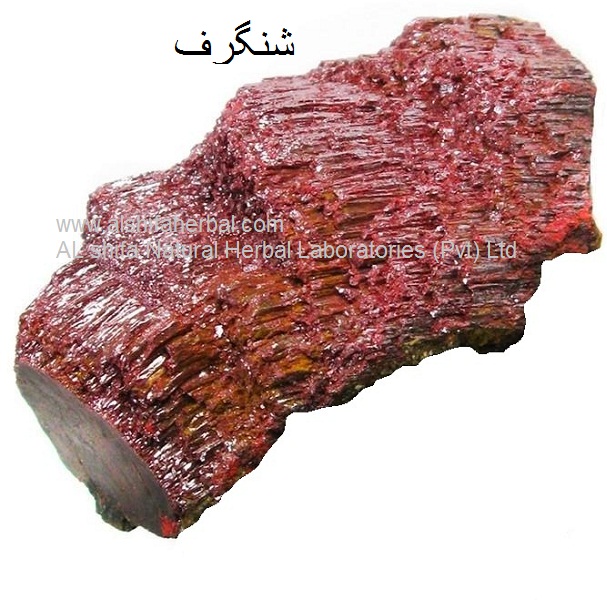 Cinnabar, or red mercuric sulfide, was used as far back as the pre-Mycenean Bronze Age around 2000 B.C. to colour paint. Since it represents one of the few naturally occurring mercury compounds, its history is closely associated with that of mercury, which has consistently played a role throughout the centuries.

From the 1st century onwards, mercury was obtained by roasting cinnabar; burning off the sulphur contained in the compound resulted in a highly poisonous elemental mercury vapour which was then allowed to condense (HgS + O2 → Hg + SO2). The miners and workers of the world’s largest mercury mines in Sisapo (= Almadén) in Spain and Idria in Slovenia soon displayed typical signs of mercury poisoning and their condition was documented at length by Dioscurides. Symptoms of chronic mercury poisoning such as shaky handwriting (a result of damage to the nervous system), suppurated infections of the maxillary and frontal sinuses, skin infections and syphilitic ulcers were typical ailments for mirror makers, gilders and milliners even into this century. The use of mercury is still an issue today, since, up until recently,  mercury was used in disinfectants, and amalgam containing mercury is still used in dentistry today.

The use of mercury  in medicine is almost as old as cases of poisoning. In the 9th century, Arabian doctors used ointments containing mercury to treat skin as well as parasitic, eczematous and leprous infections. Inunction treatment using mercury ointments («grey salves») were applied to treat syphilis when the «French disease», as it was known then, began its travels from country to country around 1490.

In obstinate cases fumigations of cinnabar were used. For this, the patient was placed naked in a barrel-like construction – whereby, with a bit of luck, the head was allowed to remain outside – and underneath, 15 to 30 g of cinnabar was heated on red hot coals. This procedure was repeated anything between six to nine times until the patient began to salivate and get diarrhoea. It was believed that by so doing the venereal poison would be drawn out of the body. Many patients died in agony as a result of this murderous practice. The term «quacksalver» for an unqualified doctor is directly related to this particular application. It was not until Hahnemann produced his own mercury compound, known as «mercurius solubilis Hahnemanni», that the transformation from poison to remedy was made.

In Alexandria in Egypt around the 3rd century, the study of alchemy began to establish itself, this practice was based on the belief that both metals and the human body consisted of mercury and sulphur. Mercury was regarded as the carrier of volatility and of fusibility, losing its metallic nature just as sulphur provided the elements with combustibility. It was this substance’s volatility and quick action which accounts for mercury’s adoption of the winged messenger of the gods as its symbol. Up until well into the 18th century mercury was to play a key role as «mother of the seven metals» and as the female principle in alchemy. Sulphur was regarded as the male principle. The alchemists have called mercury «Mercurius» since the 13th century and this is still its homeopathic name today.

The Greek word kinnábari (cinnabar) is apparently derived from the Arabic word apar (red dust), which is possibly of Indian or Persian origin. The Roman term for cinnabar was «minium». Cinnabar was an expensive pigment used for painting and was often adulterated   by adding minium, otherwise known as red lead or lead dioxide. The name minium soon became interchangeable with its surrogate.

Red mercuric sulfide is a mineral that either occurs in its scarlet-red version (cinnabar) in hexagonal crystals or as a black powder consisting of tiny, tetrahedral crystals. Cinnabaris extremely difficult to dissolve in water and only dissolves very slowly even in concentrated mineral acids. Its molecular formula is HgS and its molecular weight is 232,7.

Cinnabar is the most frequent naturally occurring mercury compound. It can be found either pure, or mixed together with other minerals. In most cases cinnabar is to be found as a deposit remaining from hot, watery solutions during periods of volcanic activity. It is largely found in Almadén in Spain, Idria in Slovenia, Italy, Peru, California, Mexico, Japan and Russia. A vast proportion of cinnabar is, however, produced artificially from mercury and sulphur using various methods.

Cinnabaris is not used in allopathy.

Homeopathy: Like sulfur and mercurius, large doses of Cinnabaris are characterised by extreme cases of ulceration accompanied by suppuration, secretion, fungous granulations as well as histolysis. It is an effective remedy against nasal catarrh, particularly when it affects the nasal sinuses and is accompanied by an increasingly dull headache. It helps atrophied secretions to flow again, thereby soothing any headache and can lead to a complete cure. Cinnabaris is also a good choice for headaches which feel as though a tight band has been placed around the head, or a feeling of pressure at the root of the nose, as well as pain emanating from the bones surrounding the nose, which can also include the eye sockets. It is also often prescribed for chronic inflammation of the eye such as iritis and keratitis. It also has a positive effect on intense ostalgia caused by inflammation of the joints or periosteal thickening.

Cinnabaris is effective in the treatment of light bleeding from wounds, condyloma around the genital area and bright red ulcerations (as in the mouth). Furthermore, old or chronic syphilitic complaints or their side effects can be effectively treated with this remedy.

Cinnabaris is often prescribed for long-term or chronic conditions .

Homeopathy: The areas of application correspond with the homeopathic medication profile. These include: Suppurated infections of the conjunctiva and the nasal sinuses; urethral and preputial infections; warts

Homeopathy: Chronic rhinitis; eye infections such as iritis and keratitis; toothache, increased salivation, inflammed conditions accompanied by ulcerations in the mouth, throat or on the tongue; warts that tend to bleed slightly; mucosal diarrhoea.

Be the first to review “Shingraf, Cinnabar”