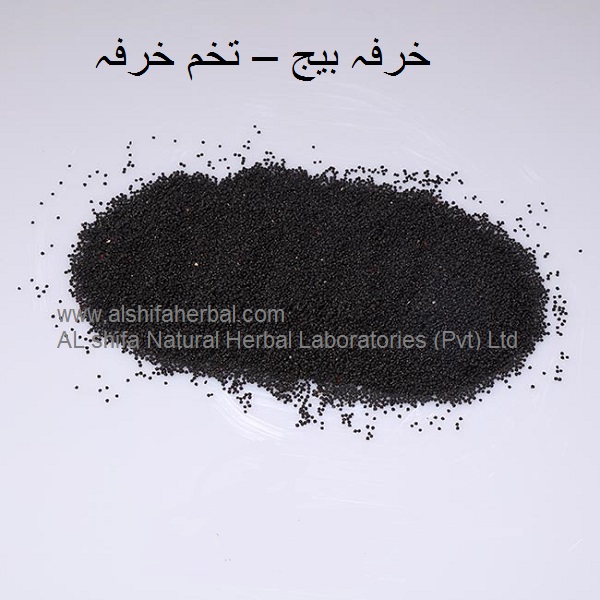 *Above mentioned Percent Daily Values (%DVs) are based on 2,000 calorie diet intake. Daily values (DVs) may be different depending upon your daily calorie needs. Mentioned values are recommended by a U.S. Department of Agriculture. They are not healthbenefitstimes.com recommendations. Calculations are based on average age of 19 to 50 years and weighs 194 lbs.

Purslane, also called Portulaca oleracea, is plants consider a weed in the United States and it is found in most gardens. Believed to have come from a desert in North Africa, it has aggravated gardeners around the world because it can be rather invasive. It spreads out before it gets taller, so it can cover quite a bit of ground. Also known as little hogweed, verdolaga, common purslane, portulaca, and pursley, purslane adds a somewhat tangy note to soups and stir-fries, and its juicy leaves can be used to add texture to salads. It is a wild-growing succulent plant is also completely edible, and it’s delicious, too. Apart from culinary facets, it is also an all-around healthy food which contains a whole range of health-boosting nutrients, like omega-3 fatty acids, antioxidant vitamins, and minerals. Cupcake Peachy Purslane, Pazzazz Deep Pink Purslane, Pazzazz Salmon Glow Purslane are few of the popular varieties of Purslane that is grown worldwide.

Purslane is a green, leafy vegetable that can be eaten raw or cooked. It is a succulent annual trailing plant sized 40 centimeters (16 in) in height. It prefers comparatively less water and soil nutrients and grows well sunny climates and can thrive in all soil types. It is often found thriving in the cracks of sidewalks and driveways even during summer’s heat. It often pops up in container gardens, flowerbeds, gardens, fields, waste ground and roadside. Purslane plant has taproot with fibrous secondary roots and is able to tolerate poor compacted soils and drought and fleshy or watery, smooth, reddish-green to purplish-red stem repeatedly branched and often forming circular mats 30-60 cm (1-2 ft) in diameter or larger. Leaves are small, oblong, wedge shaped and dark green colored. Flowers are small, yellow, solitary or clustered, stalk less, placed above the last leaves on the branches and are up to 6 millimeters (0.24 in) wide and are found blooming during June and July. Flowers later produce small green, egg or a pear-shaped seed capsule that consists of nearly oval seeds that are wrinkled, and black with a whitish scar at one end.

Purslane is best known as an invasive weed and is wild-growing succulent plant, completely edible, and it’s delicious, too. This succulent plant contains about 93% water. It has red stems and small, green leaves that are extremely delicious. Leaves are small, oblong, wedge shaped, thick and stalked, clustered together and are between 1/4 inch and 1 inch long, and 1/16 – 1/2 inch wide and are dark green colored. It has a slightly sour or salty taste, similar to spinach and watercress and add a slightly tangy note to soups and stir-fries, and its juicy leaves can be used to add texture to salads. It can be used in many of the same ways as spinach and lettuce, such as in salads or sandwiches. Apart from that Purslane leaves also consists of whole range of health-boosting nutrients, like omega-3 fatty acids, antioxidant vitamins, and minerals that are extremely essential for promoting our health.

Purslane is an annual plant that is native to Persia, Africa and India. It grows from late spring until early fall.  It was brought to Europe during 8th century by Arabs who used it as a salad herb. From Europe, the plant spread into the United States as well as Central and South America. Now it is most abundant in the eastern states, including Florida, and least common in the Pacific Northwest. It is grown throughout the world due to its health promoting nutrients, vitamins and minerals and due to its tangy and delightful taste.

Purslane has been utilized for thousands of years. Today, it really is utilized in salads, in soups, along with other dishes. It is a fantastic way to include additional taste to the dish without significantly enhancing the calorie or even fat content of the meal. Although many people just use purslane due to its slightly tangy taste within their dishes, there are a number of other main reasons why purslane needs to be consumed. Listed are some popular health benefits of consuming purslane:

Cancer has become one of the most widespread and tragic diseases in the world, so many anti-carcinogenic food items are greatly admired. Purslane is also one of the best anti-carcinogenic food items that have significant amount of vitamin C and vitamin A, both of which act as antioxidants to prevent certain cancers, especially lung and oral cancers. Apart from that, purslane also contains betalain pigment compounds that give the plant its characteristic yellow and red coloring. Beta-cyanins and beta-xanthins have been connected with anti-mutagenic effects in the body, meaning they prevent free radicals from causing mutations in healthy cells, therefore helping to prevent the development of cancer.(1)

Vitamin B2 present in purslane is a proven option for dealing with painful migraine headaches. Physicians normally recommend riboflavin in high doses of 400 mg. as a preventive treatment for headaches or as a cure for those who frequently experience serious migraine attacks.

Supplementing with vitamin B2 rich food has been shown to be a natural headache remedy and to reduce the frequency of migraines, plus it may help decrease symptoms and pain during a migraine, as well as to shorten the duration.

Although several researches is still ongoing, earlier studies have revealed that high levels of omega-3s in young children leads to decrease in certain developmental disorders, like autism, ADHD, and other issues that affect millions of children across the world. Therefore including omega 3s rich food in your regular diet helps to reduce all these development disorders in children.(2)

Purslane consists of wide range of minerals which make it a healthy choice for people who want to protect their bones. Iron, calcium, magnesium and manganese are all elements that are essential to develop bone tissue and speed the healing process of the bones in our body. This can help you prevent osteoporosis, a common age-related condition that affects millions of people.(3)

Purslane consists of very high levels of omega-3 fatty acids which are extensively considered the best source for these beneficial fatty acids. Omega-3s help to decrease the amount of “bad” cholesterol in the body and promote a healthier cholesterol balance in our bloodstream. Frequent consumption of foods that are high in omega-3s has been shown to considerably decrease cardiovascular disease and atherosclerosis, thus preventing heart attacks and strokes. Apart from that, the potassium found in purslane help to reduce blood pressure due to its behavior as a vasodilator, meaning that it relaxes blood vessels and reduces strain on the heart.(4)

Vitamin A and beta-carotene present in purslane have both been connected to eye health and vision for many years. Purslane can help to prevent macular degeneration and cataracts by eliminating free radicals that attack the cells of the eye and cause these commonly age-related diseases. Including purslane in your diet is essential to get better vision.(5)

Purslane consists of Iron that plays an important role in speeding up the process of wound healing. It helps in the formation of RBCs, the most essential constituent of hemoglobin that transports oxygen around the body. Without the proper supply of oxygen wound healing cannot take place. Purslane consists of 0.86 mg of iron which is 10.75% of the daily recommended value.

Purslane is one of the best options widely used to treat everything from diarrhea and intestinal bleeding to hemorrhoids and dysentery. Although most of the western medicine does not confirm these findings, purslane is still used for a wide variety of intestinal conditions. These benefits are mainly attributed due to the presence of so many beneficial organic compounds found in purslane, like dopamine, malic acid, citric acid, alanine, glucose, and many others.

The high content of iron and copper in purslane helps to stimulate the production of red blood cells. Both of these minerals are important for boosting circulation, which means more oxygen being delivered to essential parts of the body, increased healing speed of cells and organs, increased hair growth, and a general improvement of metabolic efficiency! Therefore it is essential to have purslane in your diet to live healthy life.(6)

Vitamin C protects our body from infections and maintains healthy bones and teeth. Apart from that it also improves our body’s ability to repair wounds and keeps us immune from bacteria, viruses and infection. It is also essential for collagen, the main structural protein found in connective tissue. Vitamin C, when taken orally, helps wounds heal faster and better. Applied topically, it protects the skin from free radical damage from the exposure to UV rays.

Since Purslane is very low in calories and nutrient-rich and loaded with dietary fiber. It means people can feel full after a meal of purslane, but they won’t necessarily up their calorie intake by very much, thereby helping people who are struggling to lose weight or maintain their diets. Therefore including purslane on your regular diet is recommended to feel fuller and achieve your weight loss goal.(7)

Purslane is one of the best alternatives to treat a wide variety of skin conditions. The high levels of vitamin A, along with mixture of other essential compounds found in this “weed” help to reduce inflammation on bee stings and snake bites when applied topically. Apart from that it can boost the healthy appearance of the skin, reduce wrinkles, and encourage healing of skin cells to remove scars and blemishes when consumed on a regular basis.(8)

Purslane consists of copper that plays an important role in ensuring the proper function of the thyroid gland. However, excess copper is a major cause of thyroid malfunction, so you need a very balanced level of copper in the blood, or else hormonal activity will be imbalanced, and you can develop symptoms of either hypothyroidism or hyperthyroidism.

Other Traditional uses and benefits of Purslane Be the first to review “Tukhm-e-khurfa, Purslane Seeds”