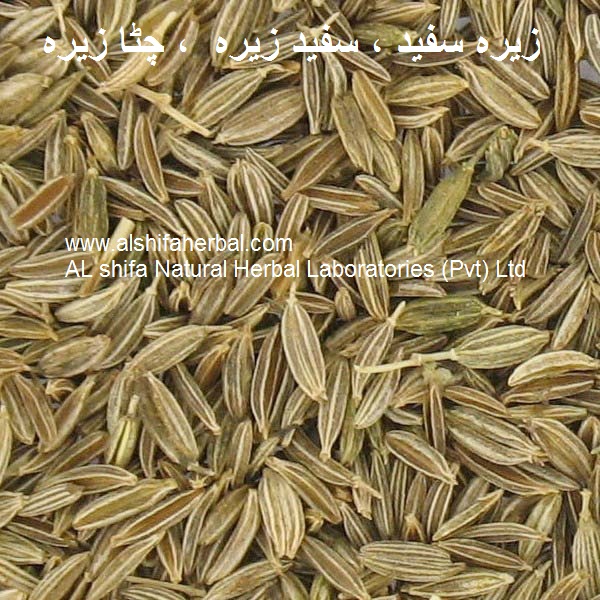 Cumin seeds have long been considered analgesic, anthelmintic, antibacterial, antibilious, antioxidant, antiseptic, antispasmodic, aphrodisiac, astringent, carminative, cooling, digestive, diuretic, emmenagogue, galactagogue, stimulant and stomachic. They are useful in chronic diarrhoea and dyspepsia, for improving appetite and taste and are also useful in cold, counters heart irregularity caused by excess digestive wind, eases clamping period pain, phlegmatic cough and bronchitis. They also build up the immune system of people who suffer severe allergies. They have also been credited with aphrodisiac properties and form an ingredient of most prescriptions for gonorrhoea. Can also be used as a natural breast enhancer. They can also stimulate menstruation and lactation. Cumin, scientifically known as Cuminum cyminum, belongs to the family Apiaceae. It is extensively used as a condiment or a spice in culinary practices of the Indian Subcontinent and some other Asian, African and Latin American countries. Cumin boasts a number of important nutrients that can help keep you healthy. Because of its strong aroma, only a small amount of cumin essential oil is used in recipes to provide these with a powerful punch. Cumin essential oil is also attributed to its bactericidal, carminative, digestive, diuretic and antiseptic properties for numerous other benefits.

Cumin is a good source of energy, vitamin A, C, E & B6, thiamine, riboflavin, niacin and vitamin, and minerals like iron, manganese, copper, calcium, magnesium, phosphorous, and potassium. It is also rich in protein and amino acids, carbohydrates, dietary fiber and a reasonable amount of fats & fatty acids. Consuming about one teaspoon of cumin daily can help you meet your daily nutrient requirements.

Cumin is known for the benefits it offers, more than its taste or flavor, as it helps in losing weight, improving digestion and immunity, and treating skin disorders, boils, piles, insomnia and respiratory disorders. Let us understand each benefit in detail.

Cumin is extremely good for digestive problems. The very aroma, which comes from an organic compound called Cuminaldehyde, the main component of its essential oil, activates the salivary glands in our mouth, which facilitates the primary digestion of food. Next is thymol, a compound present in cumin, which stimulates the glands that secrete acids, bile, and enzymes responsible for complete digestion of the food in stomach and intestines. Cumin is also carminative, which means that it relieves you from gas troubles, and thereby, improves digestion and appetite. Due to its essential oils, magnesium, and sodium content, cumin promotes digestion and also gives relief from stomach-aches when taken with hot water.

The main cause behind piles (hemorrhoids) is constipation added with infections in the wound in the anal tract, which is also caused by constipation. Cumin because of its dietary fiber content, and carminative, stimulating, antifungal and antimicrobial properties, acts as a natural laxative in powdered form. These characteristics are due to the presence of essential oils comprised mainly of cuminaldehyde and certain pyrazines. Adding cumin to your diet also helps in healing up of infections in the digestive and excretory system and speeds up digestion as well. It is important to note that it is capable to clear up all of the symptoms and causes of hemorrhoids.

Although research is still ongoing, early studies report that cumin, among a number of other spices, can have a powerful effect in preventing diabetes by reducing the chances of hypoglycemia. The animals that were tested showed a sharp decline in hypoglycemia when fed cumin seeds in their diet. They also showed a decrease in glucosuria, which is a condition where the urine contains too much glucose, also resulting in hypoglycemia and diabetes. Human testing is ongoing, but early reports show that cumin can be a very powerful tool in the battle against diabetes.

This is a very peculiar property of cumin. It is a stimulant as well as a relaxant at the same time. This property cannot be attributed to a single component alone, just as causes of insomnia cannot be attributed to a single cause. However, studies show that the proper intake of vitamins (particularly B-complex) and good digestion help to induce a sound sleep. Some of the components of cumin essential oil are hypnotic in nature and have tranquilizing effects, which also help to relieve stress and anxiety that commonly cause insomnia.

The presence of caffeine (the stimulating agent), and the richly aromatic essential oils (the disinfectants) make cumin an ideal anti-congestive combination for those suffering from respiratory disorders such as asthma and bronchitis. It acts as an expectorant, meaning that it loosens up the accumulated phlegm and mucus in the respiratory tracts, and makes it easier to eliminate those from the system via sneezing or coughing up and spitting. By eliminating as much of the mucus and phlegm as possible, it can inhibit the formation of additional material and help to heal the initial condition that led to its formation in the first place.

The common cold is a viral infection which affects our body frequently when our immune system becomes weakened. Again, the essential oils present in cumin act as disinfectants and help fight viral infections which can cause the common cold. Cumin also suppresses the development of coughing in the respiratory system since it dries up the excess mucus. Cumin is rich in iron and has a considerable amount of vitamin C, which is essential for a healthy immune system and keeps infections from forming or becoming worse.

Cumin is rich in iron and thus very good for lactating mothers or pregnant women, as well as for women who are undergoing menses. Moreover, cumin is said to help ease and increase secretion of milk in lactating women due to the presence of thymol, which tends to increase the secretions from our glands, including milk, which is a secretion from the mammary glands. Also, cumin is more beneficial if taken with honey. Cumin has a remarkable amount of calcium (more than 900 mg per 100 grams) which accounts for over 90% of our daily requirement of calcium. This calcium is an important constituent of milk and hence cumin is very good for lactating mothers.

As stated above, cumin is very rich in iron (more than 66 mg. in every 100 grams) which is more than 5 times the daily requirement of iron for an adult. This iron is the main constituent of hemoglobin in the red blood corpuscles. It is hemoglobin which transfers oxygen (as the oxide of iron) to the body cells and whose deficiency causes anemia. So, cumin can be a nutritious additive to the daily diet of anemic people. It can help reduce the symptoms of anemia like fatigue, anxiety, cognitive malfunction, and digestive issues.

The amount of iron in cumin leads to an increased hemoglobin production and subsequent prevention of anemia, but the increased blood flow has other benefits as well. When your blood circulation is at its best, adequate amounts of oxygen are able to reach the organs and the brain, leading to an optimal performance of those bodily systems. The Proper amount of oxygen and iron in the brain lead to increased cognitive performance and a decrease in cognitive disorders like Alzheimer’s disease and dementia

Almost everyone knows that vitamin-E is good for the maintenance of skin and the prevention of premature aging symptoms. It keeps the skin young and glowing. This vitamin is also present in abundance in cumin. The essential oils present in cumin have disinfectant and antifungal properties. This prevents any microbial and fungal infection from affecting the skin. Not all skin issues are disorders or infections, some of them are simply signs of aging. Vitamin E acts as an antioxidant in this regard and combats the free radicals that attack the skin and result in signs of premature aging like wrinkles, age spots, and sagging skin. This, combined with the antibacterial capacity of cumin, makes for healthy, beautiful skin that lasts far into your old age.

Boils are outlets for the removal of toxic substances and foreign matters such as microbes from the body. This means that they are the symptoms which show that a high amount of toxic substances have accumulated in the body. Those who regularly use cumin in food have a significant reduction in the occurrence of boils, rashes, pimples, and other signs of excess toxin content. Components such as cuminaldehyde, thymol, and phosphorus are good detoxifying agents which help in the regular removal of toxins from the body. The healthy way of removing toxins is through the excretory system, not through boils.

As discussed above, an abundance of iron, the presence of essential oils, vitamin C, and vitamin A in cumin boosts our immune system in a number of ways. Vitamin C is one of the most powerful antioxidants that we have in our body, and it stimulates the function and activity of white blood cells. As an antioxidant, vitamin C fights the detrimental effects of free radicals, which are the dangerous byproducts of cellular metabolism. They are constantly being created in the body, and therefore, must be eliminated. Antioxidants neutralize free radicals that lead to many diseases, including, but not limited to, cardiovascular diseases and cancer.

Cumin itself has detoxifying and chemo-preventive properties, and accelerates the secretion of detoxifying and anti-carcinogenic enzymes from the glands, as it also does to other secretions. Furthermore, it has beneficial antioxidants like vitamin C and vitamin A within its chemical makeup, in addition to those essential oils. Besides having countless other benefits, the antioxidants have anti-carcinogenic properties too, and those found in cumin are particularly good for colon cancer prevention.

What more? Cumin is also beneficial in treating renal colic, weak memory, insect bites, and painful stings. With all of these benefits, how could you say no to cumin? Add some cumin to your diet as soon as you can.

For its distinctive flavor and fragrance, cumin, as seeds, ground cumin, and cumin oil, is used in various ways;

Be the first to review “Zeera Safed, Cumin Seeds”